In this space we will be running biographies of various Board Members and Council Members for your information.  Our goal is to publicize the individuals who make up the Council and who without their involvement the Council would not exist.  Take a moment and read about these folks!

Readers—Here is this month’s biography submitted by Chuck Hermann:

My name is Chuck Herrmann, and I am the Vice President of the Albuquerque Model Car Club and editor of their monthly newsletter.  I have always been interested in both, full size and model cars, as well as a long time auto racing fan.  I recently found a paperback book on my shelf called Grand Prix Racing. I remember my mom buying this for me at a book sale at my Chicago Public School, list price 60 cents, I was in 7th grade.  Around that time I started building models, lots of cars but also planes, tanks, ships and figures. Remember the Aurora Monsters of Hollywood kits?  I had all those plus late 60’s cars. And I was really into slot car racing at the time. In high school I worked for a local department discount store that had aisles of model kits and a hobby counter for supplies and model railroading stuff.  We used to go to the auto races at the Illinois State Fairgrounds one mile dirt track, my first race was 1967 and AJ Foyt was the winner, so I have been a fan ever since.

My first real car was a 1963 Chevy Biscayne. I was in college and needed a car to get to school easier than riding a bus. My brothers were always way better mechanically than me, they got the car for free because it did not run and was getting ticketed daily. So our neighbor said push it around the block and its yours! I put in an eight track player the size of a shoebox.  Then I had a 1968 Chevy van we were customizing until I ran out of money. After that it was on to my only muscle car, a 1970 Chevelle SS396, maroon with white stripes. Eventually I could not afford to keep it maintained on a student budget so it had to go. Between my long hair and that car I was stopped a lot by the local police.

As I was finishing college and getting married, we lived in city apartments so I always had very plain (cheap) cars because I was parking on the street, starting a career and going to grad school.    When my parents sold the old family home and I was moving out of state all the old models were tossed so for a while I wasn’t into cars or models at all. Eventually we bought a house, settled down, had a bit of money, and I was renewing my interest in racing, cars and models so I bought a 1972 VW Super Beetle that needed more work than I thought.  I did take it to numerous cruise nights and VW shows. When I retired and moved to New Mexico six years ago it was not running, so I sold it and all the parts as is.  Maybe I will get a new classic eventually.  My favorites are sports/exotics, especially Porsche.

One thing I miss in New Mexico is the lack of major events, both races and model shows.  There were a lot back in the Chicago area.  I especially enjoyed going to Road America in Elkhart Lake, Wisconsin for Indycars, IMSA sportscars and vintage road racing.  One year I wanted to take my VW Jetta out for the lunch hour touring during the Road America vintage event.  My wife said no, since it was our only car. But off I went. It was great to experience the circuit.  At one point I was flying down the straight when Phil Hill in a Ferrari along with a 60’s Ford GT passed me, I was so interested in those cars I missed my breaking point for the turn 5 hairpin!  All I could think of as I locked up the brakes was what my wife would say if I wrecked the car.  Luckily I caught it just as I went onto the gravel.  Two weeks later I could still see my black skid marks going off course as I watched the Indycar race on TV.

I became active in the Albuquerque Model Car Club right after I moved here, and was happy to help find a new meeting place after we lost our old one.  I am also a volunteer at the Wheels Museum, so we arranged to use their space for the monthly model club meetings.  It is a great fit, as there is a Model Car Room at the museum that our members help support. And I look forward to the Albuquerque Museum Annual Car Show, great display of real rides and AMCC puts on the model car display inside the museum. 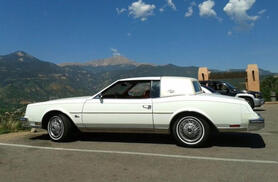 This month’s “member of the month”, is Robert M. (Bob) Jones, President of the VMCCA.  VMCCA stands for the Vintage Motor Car Club of America.  The VMCCA national website tells us that the organization was founded ‘way back in 1938.  It is truly an organization that traces its roots to an original period of evolving automobile technology.  The site tells us that the purpose of the VMCCA is to promote touring and general enjoyment of vintage vehicles.  You might ask what constitutes “vintage vehicles”?  The answer is that the organization supports events aimed at vehicles at least 25 years old.  For us in New Mexico, any car that qualifies for “Horseless Carriage” tags should also qualify for a VMCCA event.

Specifically, VMCCA focuses much of its energy in promoting tours of vintage vehicles.  I suppose this encourages it’s members to keep their cars in good condition.  The premier tour event of the season for the VMCCA is the “Revival AAA Glidden Tour” for pre-WWII motor vehicles.  That means my trusty Corvair won’t be invited.  Even with that omission this must be quite an event to enter or simply watch.

Turning back to Bob, he tells us that his garage sports two Buick Riviera’s,  One is an all original 1983 that has less than 65,000 original miles on its odometer, the other a 1968 Rivera GS with less than 71,000 on it.  Note that his classic car skills have gotten him an “Archives Award” from the Buick Club of America.

As Bob looks forward he says that he still enjoys tours, but because of “Father Time” he takes shorter journeys.  You might see him at a cars and coffee event.  Be sure to tell him you read his biography in the Council newsletter. We wish Bob all the best on his tours with the VMCCA.  —Robert Gold
​ 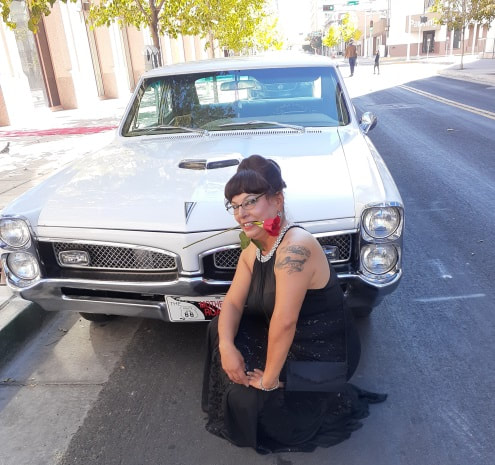 Hello, my name is Michelle Garcia I am the President of The Land of Enchantment GTO Car Club.  Our Club was founded in 1977 here in Albuquerque, NM. A group of guys with Pontiac GTO'S as their high school muscle cars would ride the streets on Eubank Blvd drag race pick up chicks and take them to drive in movies. Today we are a club of 31 second generation owned 7 women owned. We welcome all Pontiac's from Lemons, Grand Prix, Trans Am Catalina and Firebird. We enjoy hanging out with one another attending car shows and cruises.

I am the second-generation owner of a 1967 GTO hard top post. My interest in the Pontiac GTO cars came with my childhood upbringing. My mother would but us kids in goat sit at a light and would be challenged for a race and believe me it was on. We were in braced by her right arm if she had to come to a hard stop otherwise hang on. Our family outings were cruises to the Doghouse, A & W Root beer, Rout 66 Drive in and White Sands Missel Range. I come from a large family of 7 uncles and 7 aunties and 63 first cousins many of my cousins were in to restoring cars each of them had a talent from body work, painting, mechanical and upholstery diamond tuck was the fashion then. I am proud to say I was the only female in the family that has spent endless hours in my garage restoring my high school car.

My first swap meet was held on the south parking lot at UNM moons ago. My son and I attended with some parts, and he set a booth on a cardboard box with some hot wheels and tonka trucks must have been about 8years old. I meet a couple of gentlemen there with some Pontiac stuff and discovered they were the Land of Enchantment GTO Club. The evening ended with my son going home with a wad of cash and a monkey bike. Lesson learned!  In no time he was buying and swapping the whole time we were there. I must add teaching him math fractions was one of our struggles, so I handed him a set of standard and metric wrenches and said here take these to your teacher and show her what fractions are. Today he is a mechanical technician on enjoys building Subarus, welding, drifting and helping club members with their
Pontiacs.

I've been a member of the New Mexico Car Council for about 8yr now and have discovered that I'm not an outcast any more being around the car community and embracing the auto hobby brings much joy to me and my lady divas.

My next project is a 1940 Ford coupe custom deluxe family car. With the knowledge of car council, family and friends my intentions are to get that moon shine on the road again.
​